Figure: The chemistry of flavins (i) Flavins differ in the aliphatic moiety which are attached to the nitrogen N10 of a isoalloxazine skeleton (R(a)-R(d)). (ii) Lumichrome is structurally similar to flavins, but the absence of a residue R allows the 1,3-hydrogen shift to the more stable alloxazine tautomeric form with changed electronic properties.

The sensitivity of dodecin towards the redox-state of the bound flavin represents one of its key properties. While dodecin binds oxidized flavin systems with high affinities, reduced compounds cannot be adopted. On this basis, we have engineered dodecin variants to bind flavins with low substrate specificity, and employed them as a redox-sensitive shuttle, which can be filled with flavin-anchored compounds, and as a redox-sensitive load of surface anchored flavins. For the latter, it requires a surface tethered flavin (flavin/molecular wire hybrid), which enables electron transfer from the surface (electrode) to the flavin head group (isoalloxazine ring). 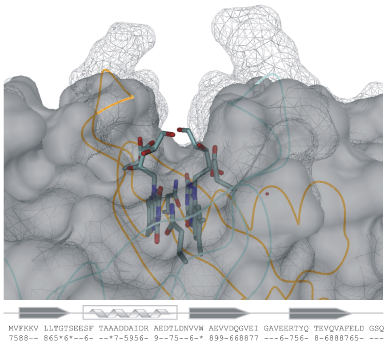 Figure: Superposition of the binding pockets of wildtype the tE-mutated dodecin. The binding pocket of the wildtype dodecin (mesh representation) and the engineered dodecin tE variant (solid), which is tolerant in ligand binding, are shown in a surface representation mode. The Cα-chains of two dodecin wildtype monomers are traced by orange and grey lines, respectively. The dodecin secondary structure and the primary sequence, with the conservation of the primary sequence per 10 dodecin homologs, are attached. A star indicates full conservation; lines indicate conservations below 50% (conservation code 5). 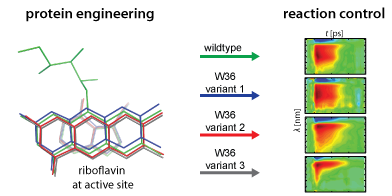 Figure: Rational design of dodecin for manipulation of the dodecin photocycle. Guided by quantum chemical calculations and high-resolution X-ray crystallography, we have exchanged the electron donating tryptophan by non-native derivatives, to generate a series of dodecins, which are modulated in electronic properties but virtually unchanged in structure. We finally use ultra-fast spectroscopy to show that the non-native dodecins are unaffected in the reaction cascade of the dodecin photocycle, but selectively modulated in the lifetimes of their intermediates

For manipulating and controlling dodecin reaction specificity, we set out to modify the ionization potential of the tryptophan W36 adjacent to the riboflavin ligand. Upon illumination, W36 donates electrons to a light-activated riboflavin, which then quenches riboflavin active states. A changed ionization potential should therefore interfere in the electron transfer rate. We calculated ionization potential for W36 derivatives, modified at the 4-position, and then incorporated selected W36 derivatives into the protein by bioorganic methods. Electron transfer rates behaved as predicted, and were faster or slower in accordance to the ionization potential. The dodecin variants, carrying the non-native W36 derivatives, did not show any structural perturbations, as tested by X-ray crystallographic studies. Thus, we introduced chemical modifications in a non-invasive manner to receive isomorphous proteins with functional characteristics changed as predicted by quantum chemical methods. 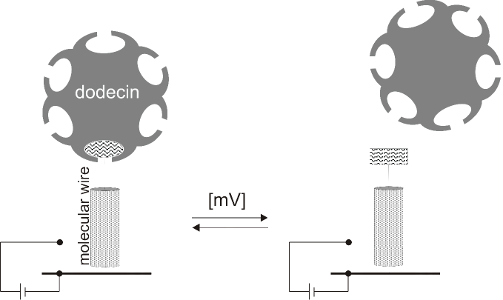 Figure: Electrochemically switching of protein states Flavin/molecular wire ligand hybrids are linked to electrode surfaces. They are switched between oxidized (left; flavin abstracted as ellipse) and reduced state (right, rectangle) by the surface potential. Driving force for a changed binding behavior are different elec- tronic and conformational properties of flavins in the oxidized vs. the reduced state.

Directed manipulation of a flavoprotein photocycle.

The flavoprotein dodecin as a redox probe for electron transfer through DNA.

Dodecin is the key player in flavin homeostasis of archaea.